We are delighted to announced that The Gathering of Stones monument has been twinned with the Dunbrody Famine Ship and The Emigrant Flame in New Ross, Co. Wexford.

The Dunbrody Famine Ship experience is one of the premier tourist attractions in the South East of Ireland. Centred on an authentic reproduction of an 1840’s emigrant vessel, it provides a world-class interpretation of the famine emigrant experience. Incorporating guided tour, costumed performers and themed exhibitions of the highest quality, ‘The Dunbrody’ provides a unique insight into the bravery and fortitude with which Irish people faced up to a desperate situation.

The original Dunbrody was built in 1845 in Quebec. She was commissioned along with 7 sister ships by ‘William Graves & Son’, a merchant family from New Ross. She was built by the expert shipwright Thomas Hamilton Oliver, an Irish emigrant from Co. Derry. The building of the ship took only six months and was supervised by her first master Captain John Baldwin, who captained her from 1845 to March 1848.

Designed as a cargo vessel the Dunbrody’s main cargos where timber from Canada, cotton from the southern states of the U.S.A. and guano from Peru. In 1845, the very year of her launch, famine struck Ireland. With the potato crop failing and food prices soaring, widespread starvation would soon force more than a million people to flee the country. So many people left, that there were not enough passenger ships to carry them all. Entrepreneurial merchants, like the Graves’, took the opportunity to fit out their cargo vessels with bunks to meet the extra demand. Between 1846 and 1851 the Dunbrody carried thousands of emigrants to North America. Lax regulation allowed a ship the size of the Dunbrody to carry anywhere from 160 passengers to over 300. In 1847 she is recorded as carrying 313 passengers to Quebec. 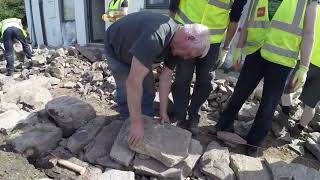